The Second Annual Latin American Bloggers Meeting was held this past weekend in Merida, Yucatan. It was organized and hosted this year by Theresa, aided by Jonna, Mimi and Lin.

I had made plans to meet Heather from Playa del Carmen at the Cancun bus depot. We were going to ride together on the same bus as we were also staying at the same hotel. Things did not get off to a great start.

First, the ferry I was taking over to the mainland was late in leaving the dock here, then the taxi I took to the bus station got stuck in traffic due to a lot of road construction. I was starting to get really concerned that I would get there in time to catch the noon bus. But I made it, with 15 minutes to spare. But where was Heather?

She was having some of the same type of problems with her bus out of Playa. She texted me with about 10 minutes left before our bus was to pull out. She was almost there. Unfortunately, her bus also got stuck in a bit of traffic. She pulled in exactly 4 minutes after our noon bus had left the station. Oops.

We ended up exchanging our tickets for the 1:oo PM bus and were on our way. The ride normally takes around four hours. But we were not done with our transportation problems.

Wildfires are burning out of control right now all over Mexico. The Yucatan Peninsula is one of the areas hit. Three times we were forced to come to a complete stop because of wild fires burning next to our across the freeway. The air was filled with the stench of burning and burned out ashes. This was the view from our bus window the first time we stopped. 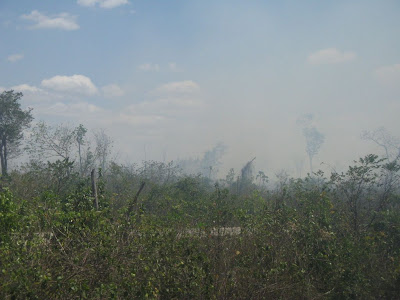 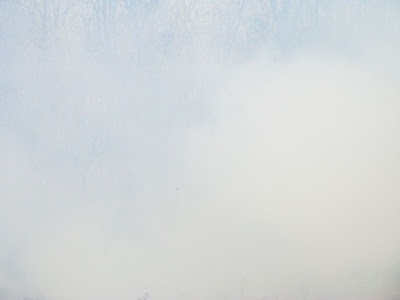 The third time we could actually see the flames. As we moved forward through the smoke, the flames were actually burning right beside us. Closer even than these. I was not frightened, having driven through fires worse than this. Still, it was aggravating to be delayed. Not to mention the fact that the jungle was burning. 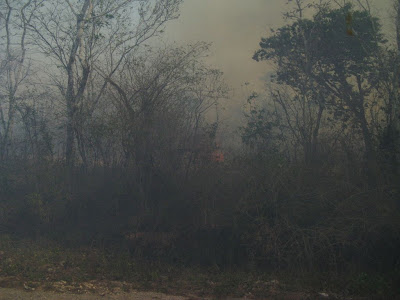 We finally made it to our hotel at 6:30 PM. Our first event of the evening was due to start at 7 PM, so we had to do some scrambling to get checked in and on our way. Also delaying us was the fact that I gave the taxi driver the wrong hotel name! Thankfully, our real hotel was only a block away! 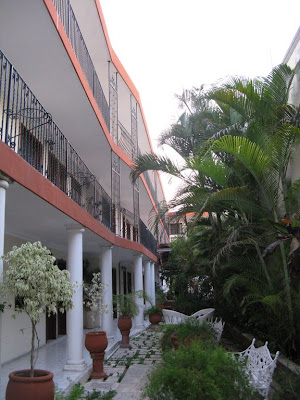 We even had a beautiful pool available for our use. 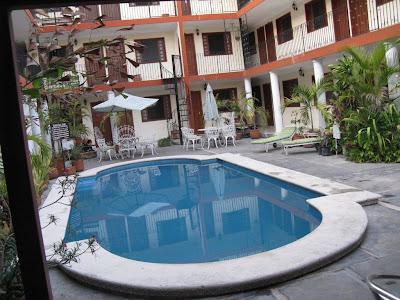 Arriving at Jonna and Mimi's for the Meet and Greet party, we were greeted by this delicious spread of botanas set up. Tasty little spread. All the beer, wine or soft drinks you could possibly want too. 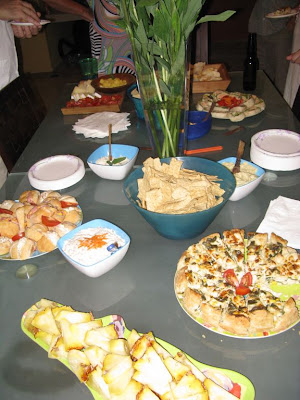 We got to tour their lovely house but, as usual in my house, the guests almost all congregated in the kitchen! Here we see, l to r, Heather, Jillian and Theresa. 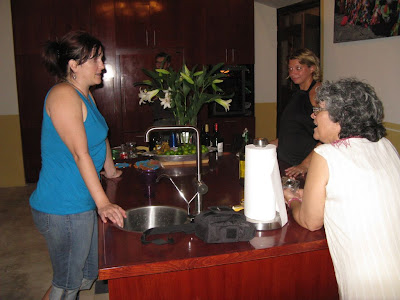 Another shot of Jillian. The red eyes are not from drinking. I just don't have a program that will erase red eye. Sorry. But it does give you an idea of how pretty she is. 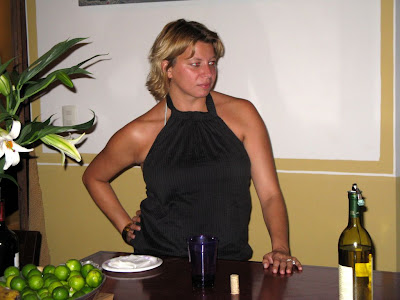 Paul and Nancy from Mazatlan were on hand also. It was pure joy to finally meet them in person. One of the side benefits of these blogger meetings is to get to meet in person the people whose lives we follow daily.

I'm not sure what is going on here really, but it sure looks like Paul is getting impatient for somebody to open that bottle of wine! 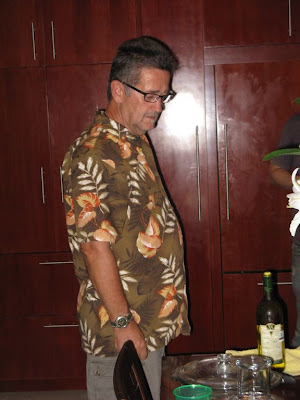 I spent a lot of time talking to and laughing with Nancy. Her wit and intelligence only add to her charm and likeability. I wish these two lived closer to me.

Last picture from me of the Meet and Greet. Nancy, Heather and Jonna. 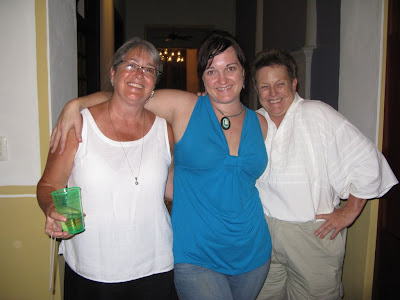 Tomorrow we'll get into the actual meetings and who all was there. Join me then!
Posted by Islagringo at 6:35 AM

Lesser beings would have given up! I am so happy that you and Heather overcame them and made it to the meet. It would not have been the same without the two of you. Awesome photos.
regards,
Theresa

Great to see all of you together. Did you get to see Paul's spectacular tattoo yet?

My family and I just got back from Isla Mujeres. Wow great Island. I really enjoy looking at your pictures and know where most of them are. We stayed at the Condo/hotel Ixchel. Perfect for us and our 3 boys.
You are a lucky guy to live there.

I'm going to bring you a red eye program hombre ;-)

HI Wayne: You don't need a red eye program, your camera has it built-in. When viewing pictures, click on menu and look for red eye correction. then follow the directions. The corrected image can overwrite the original, or you can save it as a new image. It should be very easy!

theresa: thanks. it was great fun!

1st mate: yup, we sure did! That started everybody showing theirs too!

anonymous: even though it doesn't always seem like, I am a lucky guy to be able to live here.

calypso: looks like I had the program all the time. see below.

phil: thanks for the tip! I tried it and it worked. Looks like I should my own advice about knowing your camera!

looks so nice - wish we were there