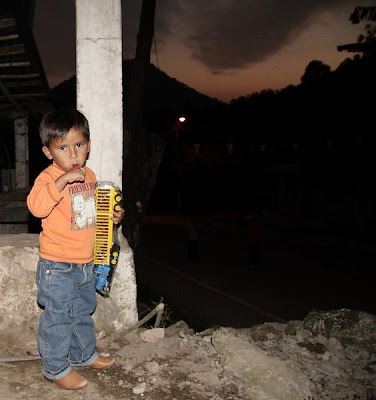 I'm proud to announce that I will again be spearheading Project Warm Hearts this year. There are still so many children in need in Ursulo Galvan that I am repeating the goodness to them. The major participants, John and Anita, in Ursulo Galvan have again agreed to coordinate things on the receiving end.

This is the lovely Anita helping to hand out little gifts of toys and some candy at the second party they were able to put together for 3 Kings Day. 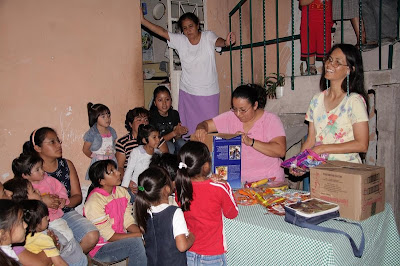 The main drive and shipping of goods will begin later this fall. Read that as meaning I am going to start constantly reminding you then! Feel free to start sending your goods and cash donations now or anytime you feel like it. John will store anything he receives until party time! That gives all of you knitters, sewers and crocheters plenty of time to build up a stash of items. Those of you who prefer to send clothing, books, school supplies or other treats have plenty of time to watch for things to go on sale or to continually raid your local Goodwill or second hand stores. 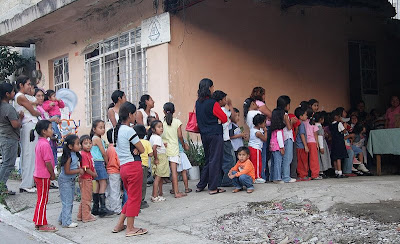 Here's another idea and what I am doing in addition to knitting: 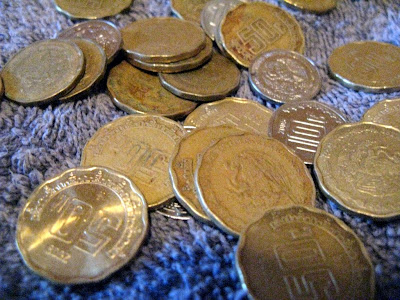 I'm throwing every 10, 20 and 50 centavo piece I get into a jar. Come November 1, I will take them to the bank and cash them in. Whatever is there will go directly as a cash donation to Project Warm Hearts II via John's Paypal account. The last time I collected these seemingly useless coins, I had 830 pesos. So they do add up! Those of you in other countries can do the same thing. Pennies and nickels come to mind. The best part? You will never even miss these little coins but they will make a big difference in some child's life.

Vicente, he who receives the packages we send, helped out with some of the door to door deliveries. Why door to door? Many reasons. Some of the families have disabled parents and cannot get their children to the party. Other families labor on into the night in the coffee fields of this area, getting home to late to make it to a party. And probably too tired to worry about it either. 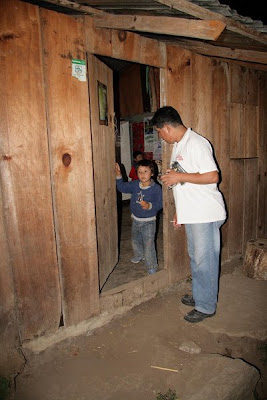 I will post the links and addresses for the charity again this fall. Remember, we collected $900, hats, school supplies and books for the kids this year. Enough for the Santa Claus party to 85 children. And enough to host the 3 Kings party. Xico has a population of around 1600 people and every child that wanted a toy, got one. Incredible work. 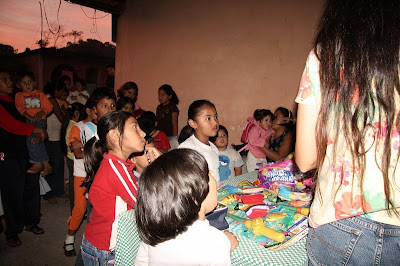 So start your motors and let's make this year's effort even bigger than before. I know we can do it! 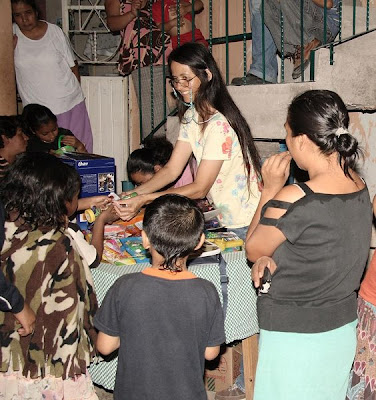 Just look at some of these happy faces. You guys did that. 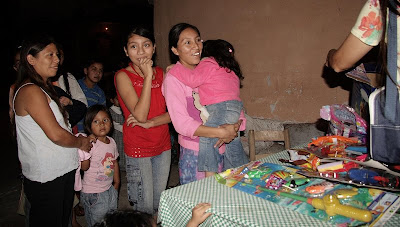 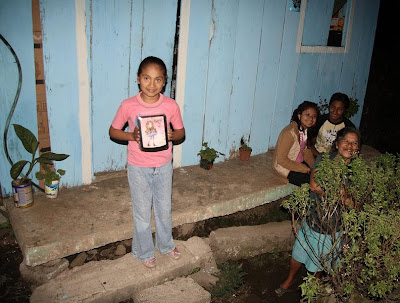 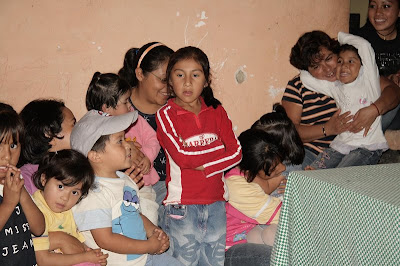 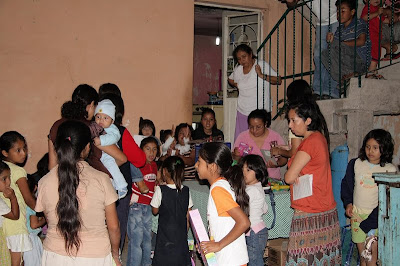 These aren't major toys that were given out. But to a poor child, they are a major event. 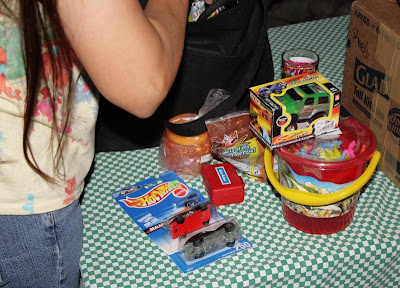 Look how patiently they wait in line. I'm sure the anticipation for the kids was incredible. 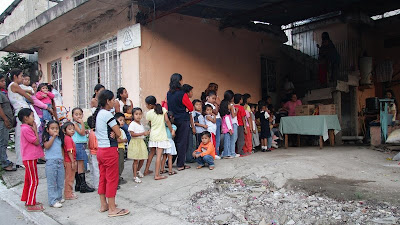 John says that when they announced to this group that all of the toys, candy and clothing were gifts from strangers from other lands, the crowd burst into spontaneous applause and cheers.

I'm so proud of all of you and will continue to be so all year. I hope that my heart fairly bursts with pride next year as Project Warm Hearts II is even bigger and better!
UPDATED TO ADD: Please see Comments for info on early donations.
Posted by Islagringo at 5:32 AM

Count me in again! I'll start buying items that are on sale and bring them down this year (and crochet some hats and scarves). Plus I'll donate money thru PayPal again later this year. (after I save all my pennies and nickles) It warms my heart to see these happy kids. And you Amigo are a wonderful person!

Wayne - Great report. I was surprised to see all the photos - I thought you would pick a few (actually I shot 120 ;-) - glad I didn't send them all - you would have been busy.

Of course we had a wonderful time giving out gifts. Thanks for all your help and support.

We look forward to doing it again.

Thanks for the update....what a blessing to these families!

One question....we will be down several times before the end of the year and could bring items. Are you collecting them to send? We could provide the funds for shipping, but know we don't want to ship from here! Otherwise, we will focus on saving up for a PayPal donation.

Thanks again for the update....great way to start a mundane work day.

How do we donate? If we are going to be on Isla soon, where do we bring donations? What do you suggest? Thanks! (I'll be there in 3 weeks, staying at Las Palmas).

OMG, I am so excited. I am going to take a class to renew my crochet skills so I will be ready and able...

HOW TO DONATE EARLY:

If you want to make a cash donation now or at any time:

scroll down and on the left hand side you will see a box that says MAKE A DONATION via Paypal. Although it says it is to pay for bandwidth, just type in Project Warm Hearts and John will know what to do with the money.

If you are coming my way at any time and want to mail things, just send me an email with the date(s) you will be here. I can collect the stuff from you and mail from here in Mexico.

Be aware that there may be a problem if you try to mail things here from another country.

Islagringo - while the address you posted works - this shorter one does as well.

Just thought I would mention this.

Hola Wayne. I am Theresa in Mérida's neighbor, Lin. She swims at my house.

I told her my brother's kids want to collect and donate all the extra sporting equipment that is hanging around Incline Village, Nevada.

We have ideas on how to distribute the goods, if they pull this off, but Theresa and I were talking about getting stuff here. She recommended I read your blog, and said you had some problems at first with your warm clothes mission.

I wasn't able to find any specific answer as to how you dealt with shipping of donatable items....possibly because I got caught up reading your blog for an hour or two.

Got any hot tips for me?
And nice job on the blog. I will try to spend more time here, I thoroughly enjoyed the read. Thanks, Lin