What's All The Fuss About?

For the past few days we have noticed all kinds of Naval ships out in the water in front of us. Then came the helicopters. Man, are they noisy. At one point, I counted ten ships with six helicopters fluttering around. Here's what they looked like: 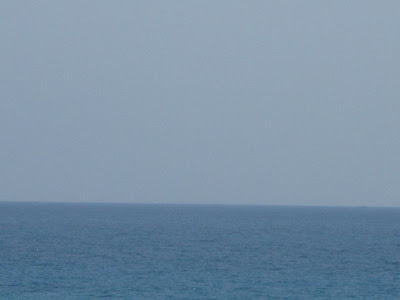 Oh, maybe I better use the zoom. 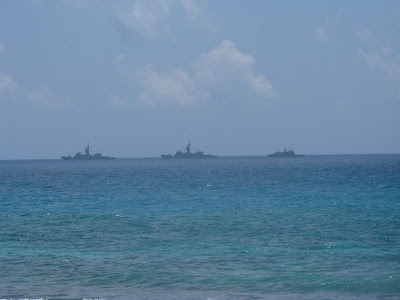 They have been at it for days. Same thing is going on over in front of Cancun. There are also ships stationed at either end of the island. 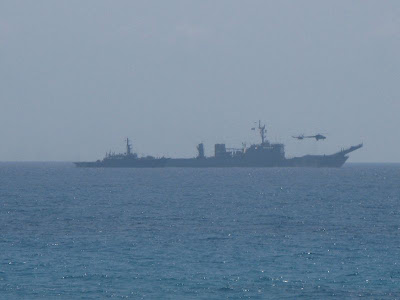 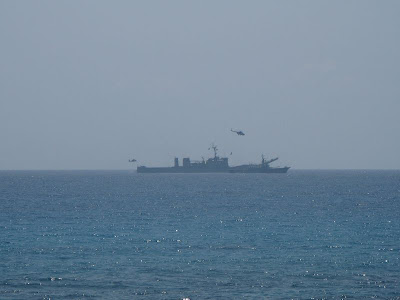 Lots of military trucks have been arriving on the island also. With the requisite military staff. I have never seen so many Navy personnel out and about working. They have put up a huge air filled balloon type stadium at the end of the airport runway. The sides of the runway are lined with huge tents for personnel to sleep in. I don't dare stop to get any pictures. I'm sure I would be arrested or put on some terrorist list, like what happened to Billie.

So what's all the fuss about? Rumor has it the biggest enemy of the drug cartels is coming to the island. Thus the maneuvers and security and massive clean up. For the uninitiated, that would be Mexico's current President, Felipe Calderon.
UPDATE:
It will be the President, the leader of all military forces in Mexico and some other important sounding dude visiting on Sunday. It has nothing to do with drugs in the area. They will be here to celebrate National Day of the Navy. Today there were fighter jets flying around in front of the house, about 5 miles out. Downtown all along the boulevard that runs the length of the navy base, there were armed to the teeth military guys lined up. One every 1.5 meters, or about 5' apart, on both sides of the road! They are taking security here very seriously. I can't wait until Sunday. I bet all the roads leading into downtown around the airport will be closed and there will be no way to get in or out of town. Stay tuned!
Posted by Islagringo at 7:26 AM

Same kind of activity happened in Cancun when Pres.Bush visited a couple years ago. My plane was stranded on the runway for 45 mins. till Air Force One landed. Cancun was the safest place with all the military and police. Navy ships were lined along the water. Bush even brought his own EMS truck. Amazing isn't it .. he didn't bother to send planes to transport us home after Hurricane Wilma. Oh Well .. love the pics Wayne, keep them coming.
KW from Michigan

I noticed the strange activity on Sunday and have seen military trucks since. They landed one of their huge helicopters in the boulevard right by the Mexican flag. Altho, the Mexican flag was not flying....to dangerous I would guess!

We woke up to the ships on the horizon on Sunday. The helicopters were coming in as we were packing to leave. Perfect timing. I don't think I could have slept with the ships to one side of us and the trucks, helicopters, etc. to the other!

Very interesting. What is the purpose of his visit. Is it related to drug trafficing in and around the area? Hmmm.

The President!! WOW! I love how Por Esto is so biased they still call him the "false President" when they mention him in articles. Did you ever notice that?

Hmmm, nothing to do with drugs eh? Mr. President just looking for a little R & R on Playa Norte? Good luck with the mess the island will certainly be.

Do you feel any safer with all that "protection" around you? ;-)

This would NOT be a good time to go zooming up and down the boulevard, bare ass, screaming, "Viva La Revolucion...!!!!"

This would NOT be a good time to go zooming up and down the boulevard, bare ass, screaming, "Viva La Revolucion...!!!!"

I heard about this from one of the taxistas :)
Looks like it`s going to be an exciting Sunday!

Is there any place we can go to actually see him, or is it all kept under wraps?

I`m not going to bump into him at the beach in his swimming gear, will I? :D

In an email from a friend who lives on the airport strip:

I have about 200 soldiers encamped outside my front door. The scariest thing is that they only have two porta-potties!
The big deal is Calderon's visit on Sunday. There is a virtual army camped outside on the airport tarmac-tents with air conditioners attached, trailers for cooking, helicopters, ships out back-it's a political invasion. One helicopter took his Popemobile type vehicle off a ship and gently lowered it from ropes onto the airport runway. Nacho and some other people are staying in my apartment Saturday night because the roads will be closed on Sunday and they want to see him arrive. It really is exciting-more fresh paint has been used here than in the aftermath of Wilma!
I went over to Cancun yesterday to buy champage so Nacho and I can sit on the terrace upstairs and drink Mimosas while we watch the spectacle. Mostly here I hear people bitching about the waste of money bringing in this entourage ten days ahead of the visit and the amount of personnel and equipment brought in for this event. Yesterday I was waiting for the ferry and jets flew overhead, like the Mexican version of the Blue Angels.

All this crap and I have now heard he will only be here an hour. He is going to take part in placing a wreath at sea to honor the navy dead. Also, there is going to be a 24 no drinking rule, just like during an election, for the Mexicans. Tourists and Gringos can still drink though. They have also outlawed any kind of demonstration. No free speech here.